Thing 4 of 23 Things on a Stick had us exploring the online photo service Flickr.  Of course, I had to take the difficult path.

I had no problem coasting around Flickr looking at photos and I found a feature that’s really intriguing – the geotagger.  You can place a dot on a world map showing exactly where your photos were taken.  People can search Flickr’s map and see what pictures were taken where.  If you visit Flickr, just type Morrison County, Minnesota, into the map’s search feature and have fun looking.

I uploaded a photo to Flickr from our Uncommon Focus photo project that we completed in 2003.  I called the photo “Fishing in Grass” because that’s what appears to be happening in the photo.  I figured out how to geotag it after fiddling with the map.  Flickr wants you to be precise about location, so you have to zoom in very close before it’s satisfied with your geotag.

The next step in Thing 4 was to post a photo to your blog directly from Flickr.  Here’s where I had the problem.  Because Skimming the Cream runs through our website and server, and not through WordPress, I had trouble getting Flickr and Skimming the Cream to talk to each other.  I was finally successful, but ran into another problem.  Once they’re on speaking terms, Flickr is supposed to display a “Blog This” button above our photos.  It doesn’t.  I guess they’re still not on proper speaking terms, but I don’t have enough experience to figure out what’s going wrong.

Good thing I know how to post photos here the old-fashioned way – I upload them directly to our server and link to them, which I shall do without further adieu for the “Fishing in Grass” photo. 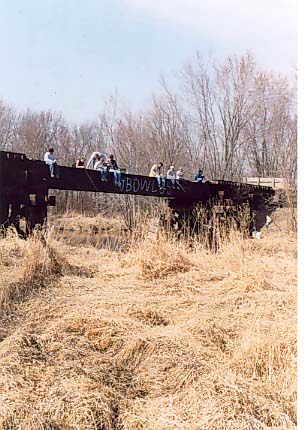 I can see some interesting possibilities for the geotagging feature on Flickr, so even though I had an issue I couldn’t solve, the service is worthwhile for everything else it provides.

The Weyerhaeuser Museum is closed due to an executive order by the Governor. Pandemic procedures will be followed. Read more here.