The Morrison County Historical Society owns and operates The Charles A. Weyerhaeuser Memorial Museum in Little Falls, Minnesota. The museum building was designed by Miller Dunwiddie Architects and was completed in 1975.

The Charles A. Weyerhaeuser Memorial Museum building was specifically designed to show visitors several aspects of Morrison County history. It evokes the popular Greek Revival style that was popular among the early settlers of the county. Indigenous building materials typically found in Morrison County were used in the construction of the building. Predominant among the building materials available to early settlers of the county was wood.

Narrow wood siding has been used on the exterior and the color of the siding has been selected to give the appearance of weathered wood. Inside the museum, wood beam ceilings in the corridors are rough sawn to look like gang sawed lumber. Floors in the major exhibit areas are of random width oak planks. The wood-paneled doors throughout the museum feature box locks and steeple tipped brass hinges that are representative of hardware from an earlier era.

The chimneys and fireplaces in the museum are constructed of used local brick manufactured around the 1900s. The brick was laid as it was in the early buildings of the county with “beaded” tooled joints and corbelled or “stepped” chimney caps. Many buildings in county communities such as Royalton, Pierz, and Little Falls, are made of this distinctive buff or cream-colored brick. Much of this brick was produced by the Duclos Brick Factory, which was located just west of Little Falls. Clay deposits in this area were suitable for the manufacture of brick and several brickyards were operated here at one time.

Slate floors and fireplace hearths in the museum recall the natural geological formation of slate found under the natural waterfall in the Mississippi River in Little Falls. The first dam was built at the site of the falls in 1849.

Architectural details on the exterior of the building, such as partial return cornices or “hooked gables” on the gable ends, colonnaded entrance porticoes, and wide vertical boards at the building corners, are all remnants of the Greek Revival style. To these have been added typical features seen in the early buildings of the county: Operating wood shutters (both inside and out), paneled wood doors, wood shingled roofs, and double-hung windows with small panes of glass. Many of these same details were seen in the original buildings at Fort Ripley, specifically in the enlisted men’s barracks and officers’ quarters, as well as in the first Morrison County Courthouse at Little Falls.

The grounds surrounding The Charles A. Weyerhaeuser Memorial Museum also serve as a reminder of county history. The site of the museum is on a high bank overlooking the Mississippi River. The Mississippi River provided an avenue for early exploration of the area by Zebulon Pike in 1805. Pike’s winter fort site was located just south of the museum. The river also served as a major transportation route for early fur traders, missionaries, and settlers to the region. Visitors can enjoy a splendid view of the river from the gazebo on the grounds.

Landscaping at the museum includes representative prairie plants which are native to Morrison County. These have been planted in the informal style of the 1800s. Crushed granite surrounding the paved courtyards of the museum is typical of the native varieties found in the county. Near the entrance of the museum sits a large block of dark gray granite. This was taken from the quarries of the old Sperry Granite Company located south of Freedhem. A Victorian fountain completes the landscaping theme and contributes a calming gurgle of sound to the back courtyard. 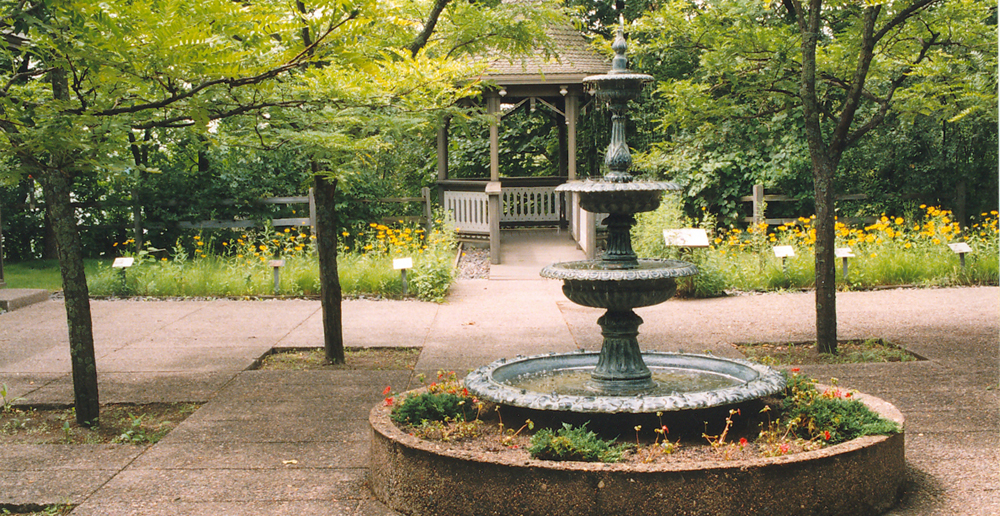 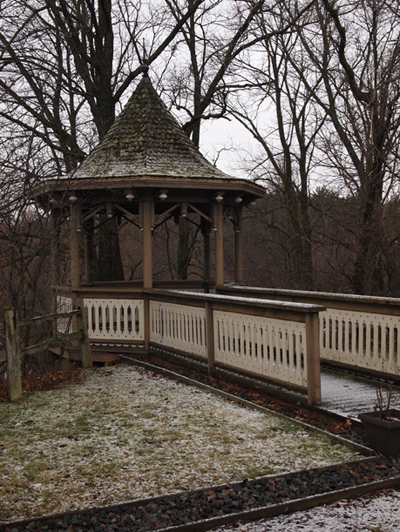