WHAT: Think Before You Knock: A Conversation on the Importance of Historic Preservation

WHERE: The Charles A. Weyerhaeuser Memorial Museum, Little Falls, MN

WHO: Hosted by the Morrison County Historical Society

COST: Free and open to the public

History organizations like the Morrison County Historical Society have a reputation for wanting to save old buildings; so much so that members of the public think historical society staff is willing to jump between a wrecking ball and its intended target. While this dramatic image leads people to using the term “hysterical” society in relation to such organizations, those in the history field are quite deliberate in deciding which buildings and sites are worth saving.

How do history organizations determine what structures are worth the time, effort and money to preserve?

Find out at “Think Before You Knock: A Conversation on the Importance of Historic Preservation,” which takes place Thursday, July 2, 2015, at The Charles A. Weyerhaeuser Memorial Museum in Little Falls, MN. The event starts at 5:30 p.m. with a social gathering time. The program will be held at 6:00 p.m., with the event finishing at 7:30.

The Morrison County Historical Society, which is hosting “Think Before You Knock,” has long been involved in efforts to preserve local buildings. This is a perennial issue that continues to evolve, particularly as “newer” buildings reach an age where they can be considered historic.

“Think Before You Knock” is part of the History After Hours series being held in Little Falls throughout 2015. Admission to this event in the series is free and open to the public. For more information, call 320-632-4007. 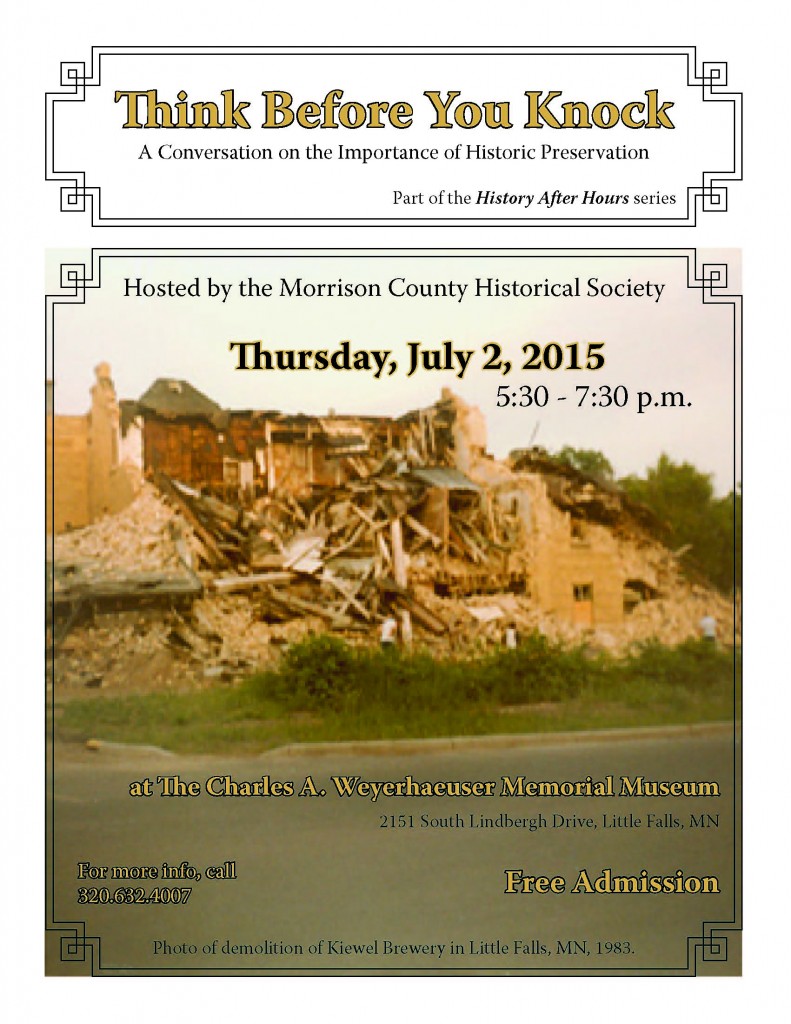 The Weyerhaeuser Museum is closed due to an executive order by the Governor. Pandemic procedures will be followed. Read more here.