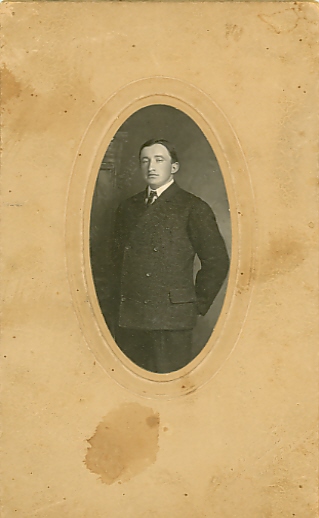 #2001.39.22 Joseph Bernard Karpinski, c.1900. Frick’s Studio – Little Falls, MN
Thanks to the help of Ann Karpinski, one of the unidentified photographs in our Gallery of Unidentified Photos has been identified. The man in the photo is Ann’s grandfather, Joseph Bernard Karpinski. Joseph, who was born in Poland on 24 April 1885, came to the United States with his parents when he was twelve. According to his obituary (Little Falls Daily Transcript, 6 May 1968), Joseph moved to Morrison County in 1900. This photograph is one of a group of thirty-one photographs and photo postcards that were donated to the museum by Esther Stanek of Little Falls, Minnesota. If you think you can help us identify any of the other photos, be sure to let us know (320/632-4007; mchs@littlefalls.net). Thanks again for your help, Ann!