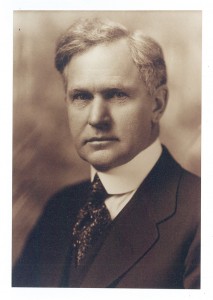 The Charles A. Weyerhaeuser Memorial Museum in Little Falls, Minnesota, was named to honor lumberman Charles A. Weyerhaeuser. Charles and his business partner, Richard “Drew” Musser, came to Little Falls at the behest of their fathers, Frederick Weyerhaeuser and Peter Musser. They were charged with operating the Pine Tree Lumber Company, which was established in 1891. Charles managed the operations of the mill and personnel issues, while Drew took care of the financial side of the business.

The men had houses constructed in 1898 along the east bank of the Mississippi River within sight of the Little Falls dam. The houses, which are mere feet from each other,were designed by Clarence H. Johnston and built by A. D. Harrison. The houses are now owned by the City of Little Falls and, taken together with the surrounding property, are known as Linden Hill. Both are on the National Register of Historic Places.

On December 14, 1898, Charles married Frances Maud Moon. The couple had two children, Sarah Maud and Carl. The family remained in Little Falls until 1919/1920, when the Pine Tree Lumber Company ceased its operations. Charles died in February 1930 at the age of 63. He died in Bombay, India, while on a cruise with his wife.

The story of Charles Weyerhaeuser converges with the Morrison County Historical Society (MCHS) in the 1960s. MCHS, which had been founded in 1936, was in the process of expansion. Its collections were located in the Historic Courthouse in Little Falls and the organization needed more room to grow. The board made plans to have a building constructed. During this process, Charles’ daughter, who was now Mrs. Robert J. Sivertsen, got involved. She and her husband, along with her brother, Carl, decided to fund the construction of the Historical Society’s new home. Believing strongly in the Historical Society’s mission, they wanted the exhibits and activities to remain focused on Morrison County history, while using the building as a memorial to Charles. The museum, which was designed by Foster Dunwiddie, was meant to reflect county history as much as its contents do. The Charles A. Weyerhaeuser Memorial Museum was dedicated on August 24, 1975, and thus became the new home of the Morrison County Historical Society.