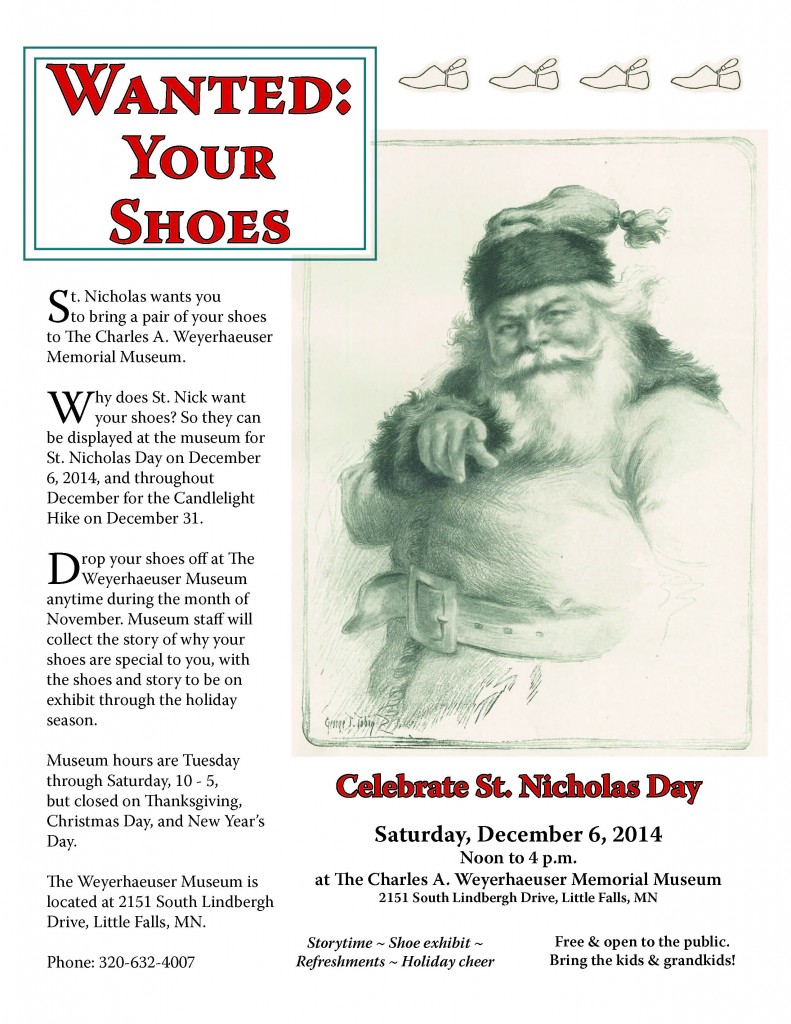 Larger version of above pic: http://morrisoncountyhistory.org/stnickday2014.pdf

Americans are familiar with the tradition of hanging stockings, typically by a fireplace, as part of a Christmas celebration. If girls and boys behave themselves during the year, Santa Claus, or St. Nicholas, will fill those stockings with goodies during his stealthy Christmas Eve visit.

This tradition started with St. Nicholas Day, which falls on an earlier December day than Christmas Eve. Other countries celebrate by putting out shoes or boots, not stockings.

The Morrison County Historical Society (MCHS) is getting in the holiday spirit by requesting shoes from the public for a special exhibit during the month of December. MCHS will be celebrating St. Nicholas Day on Saturday, December 6, 2014, with a public event at The Charles A. Weyerhaeuser Memorial Museum.

According to Ann Marie Johnson, MCHS curator of collections, “St. Nicholas Day is a natural outgrowth of our current showcase exhibit, Saunter: On the Path of the Pedestrian. We want to keep the theme, which includes shoes and people’s mobility, going. The connection of shoes to St. Nicholas Day was too good to pass up.”

MCHS will be collecting shoes, one pair per person, throughout the month of November. Morrison County residents are invited to drop their shoes off at the Weyerhaeuser Museum during its open hours, Tuesday through Saturday, 10 a.m. to 5 p.m. Museum staff will ask why the shoes being offered are special to their owners and will include this information in the exhibit.

The exhibit will open on St. Nicholas Day and run through December, culminating in another pedestrian-related event, a New Year’s Eve Candlelight Hike between the Weyerhaeuser Museum, Lindbergh State Park and the Lindbergh Historic Site.

For more information, contact the Morrison County Historical Society at 320-632-4007. Shoes may be dropped off at The Charles A. Weyerhaeuser Memorial Museum, 2151 South Lindbergh Drive, Little Falls, MN.

Help save Morrison County's history by becoming a member.Sign up!