This beautiful gem was constructed in 1905 for the Swanville school district, one of the earliest districts to be formed in Morrison County. Located in Swanville, Minnesota, along De Graff Avenue on 6th Street not far from the Little Falls and Dakota Railroad, the solid three-story structure served as a school for over seventy-five years and was a testament to the importance of education in central Minnesota. The first brick school in the district, it replaced an earlier building that was located approximately three blocks away on Berkey Avenue. That building itself replaced another school that had been destroyed by fire in 1888. The source of the blaze was said to be “too good a fire” built by the school janitor, John Pepin. (Drager, Lowell C., Our Hometown Swanville: A Centennial Album of Photos and Memories 1893-1993)

The pride of local residents, the 1905 building made a strong statement about the commitment of area citizens to education and to the community. As with many other older historic schools, its unique features and high quality craftsmanship and materials made it an important part of the cultural fabric of everyday life. Remodeling in 1919 removed several character-defining features including the bell tower, peaked roofline, stepped gable ends and decorative eye window over the main entrance. Classrooms were added at the same time as the district was running out of room due to consolidation with District 19 and District 46 in neighboring Todd County. Later additions – 1938, 1959, 1967 – provided for an auditorium, industrial arts and home economics space, music room and elementary classrooms. The original 1905 building and the 1919 addition were demolished in 1981 and replaced with a new structure. In 2007, additional learning space was added, including a commons area and elementary computer lab, and other portions of the school were remodeled. 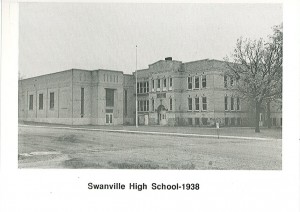 Wednesday: By appointment (Please call at least 24 hours ahead to schedule.)

This site uses functional cookies and external scripts to improve your experience.

NOTE: These settings will only apply to the browser and device you are currently using.

We use Google Analytics to collect user analytics.

You may opt-out of having Google Analytics collect your site activity data by following the instructions here: https://support.google.com/analytics/answer/181881.