My husband was reading the St. Cloud Times online this evening and saw an article about the Highway 10 bridge north of Little Falls being closed due to an ice flow that was threatening the structure. So, what did we and a gazillion other people in Little Falls do? We headed out to see what was happening on the Mississippi River. Hubby and I grabbed a camera, as well, although we weren’t the only ones with that idea.

There was a fire truck parked along Paul Larson Drive, with a number of firefighters stationed on shore in LeBourget Park keeping an eye on the river.

We drove to a cul-de-sac on the northwest side of the Highway 10 bridge to get a good view of the ice flow causing problems. We had enough light at this point to get a number of clear pictures. 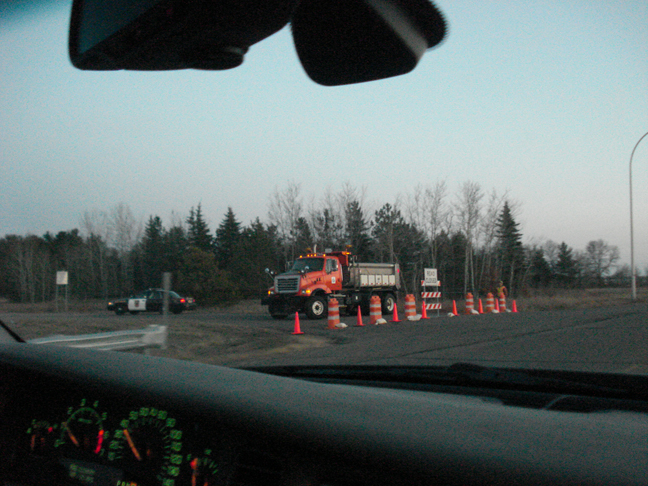 While in the cul-de-sac, another couple came along and told us that there was erosion along one part of the other side of the bridge, but this could only be seen from in Little Falls with a good set of binoculars. By the time we drove through the crowded city and parked in a lot where the old Larson Motor Service used to be, the light was too dim for clear pictures. Below is the clearest shot we could get of the ice piling up near the base of the new-ish empty apartment complex located on the bank of the river.

While Little Falls residents may appear to take the river for granted, our true feelings about “Old Miss” come to the fore whenever a dramatic incident develops. We’ll be holding our collective breath to see how this affects the Little Falls Dam, which has seen water pounding through it at tremendous speed for the past number of days.

[Addendum – March 18, 2010: The St. Cloud Times appears to have pulled the story I linked to above. Here’s a link to the story as reported by Minnesota Public Radio.

There is no flooding in town because of the ice flow. This morning I noticed people on the Broadway bridge in Little Falls keeping an eye on the river. Front Street, which goes past the east side of the dam, was still closed as of 8:40 this morning, but Wood Street, one block east of that, had been reopened.]

[Addendum – March 19, 2010: The ice flow appeared to have cleared from the river above the dam by 8:30 this morning. Front Street has been reopened. Water continues to roar through the dam.]

Here is a link to an article in the Brainerd Dispatch about the reopening of one lane on the Highway 10 bridge:

Not sure if both lanes have been opened yet.]