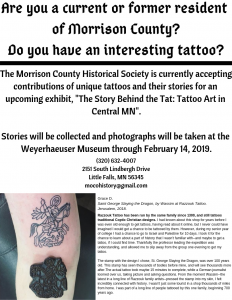 As an art form, tattoo is positively historic. Found on the remains of Otzi the Ice Man and Egyptian mummies dating back to between 4000 and 3100 BC, people have been inking their bodies with designs for a very long time, indeed. After going through a period in which tattoo was seen as objectionable in American society, the art form has gained acceptance and is now flourishing. People with tattoos tend to have stories behind their ink, no matter how large or small of an area it covers. The Morrison County Historical Society would like to learn more about those stories.

We understand that tattoo lovers tend to have multiple tattoos. We would like these individuals to choose one that has a compelling story and we will photograph it and capture its story for our upcoming exhibit, with an opening planned for April 2019. If you have a full sleeve, back piece, or body suit that has a cohesive story, we will photograph as much of it as they can. (As the museum has a family audience, we will not photograph tattoos located in places that aren’t comfortable for family viewing.)

If friends have coordinating tattoos, we would love to capture their shared story and a photo.

We will be collecting photos and stories until February 14, 2019, so give us a call at (320)632-4007 or email us at mocohistory@gmail.com to set up a time to come to The Charles A. Weyerhaeuser Memorial Museum to have your tattoo photographed and share its story!